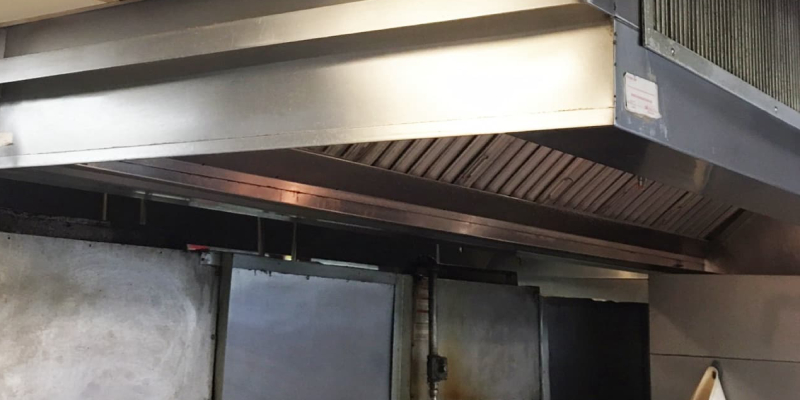 When you cook in a large commercial kitchen, hot grease will slowly accumulate on the hood above the grill. This grease can work its way into the vents, fans, and other parts of the kitchen exhaust system, leading to foul smells and other issues spreading throughout the building. It can even become a major fire hazard if the hood isn’t cleaned regularly.

Why Is Hood Cleaning Necessary?

Some restaurant owners don’t clean the hoods as regularly as they should because they don’t see the point. The hood and the rest of the vent system is made from stainless steel, so it can’t catch on fire. When grease builds up, though, the grease itself can actually catch fire. It burns very quickly, and grease fires can easily spread throughout the entire kitchen. They’re very hard to get under control, too. Most commercial sprinkler systems aren’t designed to deal with grease fires,  so they don’t always put out the flames.

How Is Hood Cleaning Done?

The amount of work it takes to clean a kitchen hood really depends on how often the hood is cleaned. If you clean your hood regularly, it won’t be that bad. In fact, you may not even need to scrape out any of the grease. You may be able to use a food-safe chemical and hot water. If you don’t clean the hood as often as you should, though, the grease will harden, and it will be much tougher to remove it all.

How Often Do You Need to Clean Your Hood?

Commercial restaurant kitchens that are busy every day will have much more grease build-up on the hood than kitchens that aren’t used as often. For example, some churches have full commercial kitchens, but those kitchens may only be used when the church is hosting a large event such as a wedding. They won’t need to clean the hood as often. If the kitchen is used daily, it’s likely to need monthly cleanings at minimum.

Getting Help Cleaning Your Kitchen Hood

If you’re in need of a professional hood cleaning company, you need to call Grand Natural. The company offers a number of different grease cleaning services, all of which are designed to keep your employees, customers, and kitchen safe. To learn more, contact us online or visit us at 135 South Lemon Street in Orange, California.